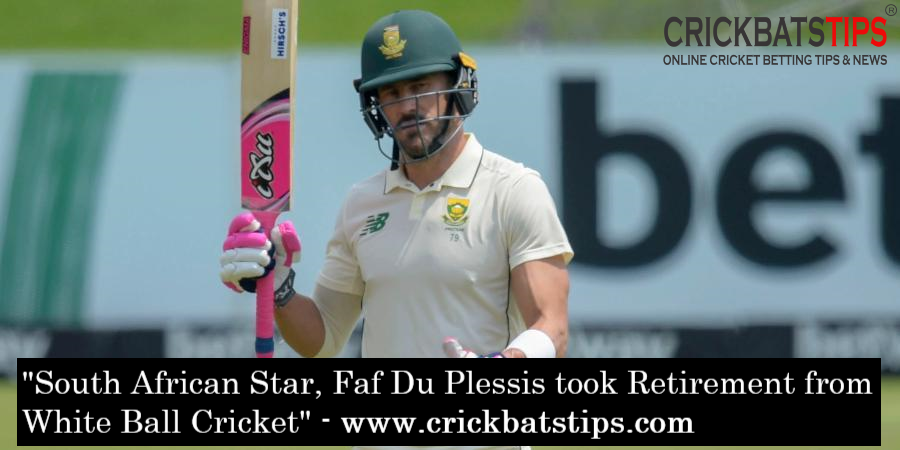 International Cricket News: South African Star Faf Du Plessis took Retirement from White Ball Cricket. He announced the news on Wednesday (17 February 2021) after Australia’s tour of South Africa was called off because of the ongoing Covid-19 situation in South Africa.

Former South African Cricket Captain took on Instagram and write a post to announce his retirement from Test Cricket. However, he also stated that he will focus on the T20 formats of the cricket tournament. He writes “My heart is clear and the time is right to walk into a new chapter,”.

“The next two years are ICC T20 World Cup years. Because of this, my focus is shifting to this format and I want to play as much of it as possible around the world so that I can be the best player I can possibly be. I strongly believe that I have a lot to offer to Proteas in this format. This does not mean that ODI cricket is no longer in the plans. I am just making T20 cricket the priority in the short-term,” – Faf Du Plessis wrote on the Document he shared on his Instagram post.

He represented South Africa in 69 test matches, and in these 69 matches, he has an average of 40.03 after scoring 4163 runs. Faf Du Plessis has 10 Centuries, and 21 Half Centuries in his Test career. the highest score made by him in Test Career is 199 that comes in December 2020 against Sri Lanka at SuperSport Park, Centurion.

Faf Du Plessis captained the Test Team in 36 matches before he himself decided to step down as the Test and T20I captain of the team in February 2020.