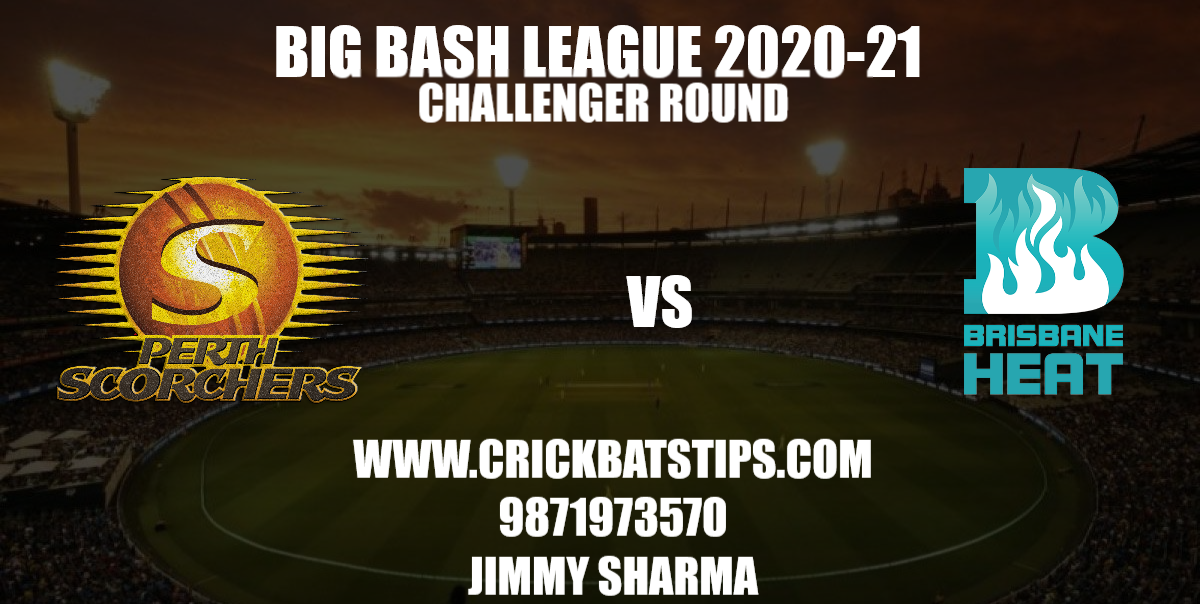 Big Bash League 2020-21:Perth Scorchers vs Brisbane Heat Challenger Round Match Predictions and Winner News by Jimmy Sharma. Call or Whatsapp now at 9871973570. Today, the 2nd finalist will come to light after the challenger round of Big Bash League 2020-21. So, get ready to bet on the second most important match of the tournament between Perth Scorchers vs Brisbane Heat.

Perth Scorchers and Brisbane Heat are going to play the Challenger round or we can say the semi-final match of the Big Bash League 2020-21. The match is scheduled to start at 2:10 P.M. IST. The match will be played at the Manuka Oval, Canberra stadium. Both the teams are ready to play the crucial game that can lead them to the Finals.

Get ready for the live predictions of the match and winner news updates. Because at crickbatstips.com we are going to provide you the best predictions for challenger match.

Perth Scorchers and Brisbane Heat both have played extremely well in the tournament so far. As a result, they are standing opposite each other in the semi-final match of the tournament. In the group matches, Perth Scorchers have an impressive record with 8 wins out of 14 matches and have topped the points table of Big Bash League 2020-21.

However, Brisbane Heat is just a match behind them and have won 7 matches out of the 14 in group matches. They were in 4th place at the table. But, reached the challenger round after beating Sydney Thunder in the Knockout Match of the League.

If we talk about the Head-to-Head Matches, they both have played 15 matches together and Perth has won 8 matches while Heat has won 7 matches. In their last 2 matches, both have win 1  match each.

Today’s match odds for the Challenger Round between Brisbane Heat and Perth Scorchers are quite similar as both the teams are playing well and have performed similarly in this tournament. However, we have listed the Cricket Bhav and match odds from the 4 top Bookmakers.

According to Betway, the cricket bhav for Perth Scorchers are 1.67 and Brisbane Heat is 2.10. For more details have a look at the table below.

Cricket Bhav according to various Bookmakers:

VOTE NOW FOR YOUR FAVORITE

If we look at the last 5 head to head matches, Brisbane Heat has won 2 matches and Perth Scorchers has won 3 matches.

Have a look at the below table for all Head-to-Head matches between Perth Scorchers vs Brisbane Heat.

The table above is updated after the BBL fixture 2020-21. For the latest news and predictions call or Whatsapp Jimmy Sharma at 9871973570.